Scott Henderson is an American product designer working in New York City. Known for his innovative consumer products in the areas of Houseware’s, Electronics, Furniture and his line of Museum Store gift objects called MINT, Scott has jumped into the world of Super Yacht Design with his 70m motor yacht PRIONA concept. The PRIONA superyacht, deriving her name from ‘Prionace Glauca’ or Blue Shark, is a gestural study on the exterior form of the vessel. The Blue Shark is one of the fastest and most efficient fish, generating speeds in excess of 70km per hour. Her elegant and powerful form communicates minimalism and extreme aquatic speed—seamless with the ocean after millennia of evolution. 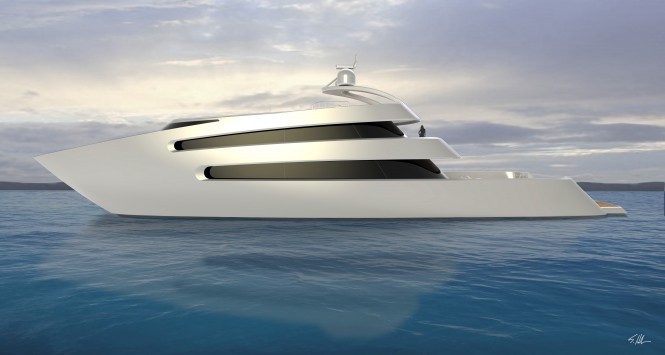 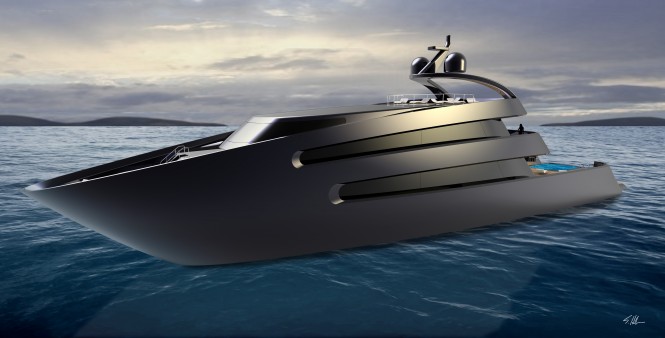 The luxury yacht PRIONA’s form is uni-body. The hull emanates from the bow and travels back using a single surface. There is no break between the form elements on the PRIONA’s composition, the upper deck structure in the rear of the yacht and the side walls of the hull are derived from the same common surface. This gives the vessel a clean appearance, its visual statement absorbable at a glance. Rather than break up the two dominant formal elements, the hull and the living spaces that rest above the deck line the PRIONA avoids tasking the viewer with too much visual information, making the composition instantly iconic. 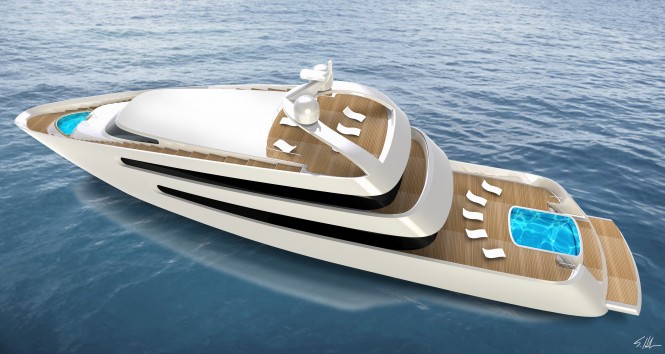 Inspired by the Blue Shark’s powerful gills, the sides of the super yacht PRIONA are sliced in continuous lines that form the vessel’s main decks and windows. The PRIONA appears to be taking in vast quantities of oxygen through these integrated vents, contributing to its powerful gesture. 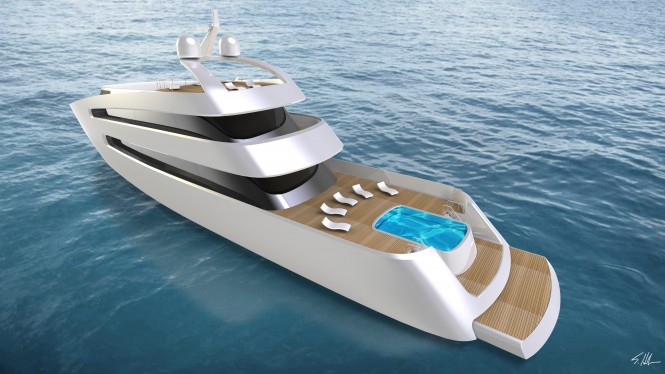 The PRIONA yacht features an upper sundeck that is not disrupted by the Communications / Navigation Tower, as her tower cantilevers over the space without contacting the area of use. She also features two swimming pools, fore and aft, and a retractable swim deck that can store all manner of water toys and two Jet-skis. 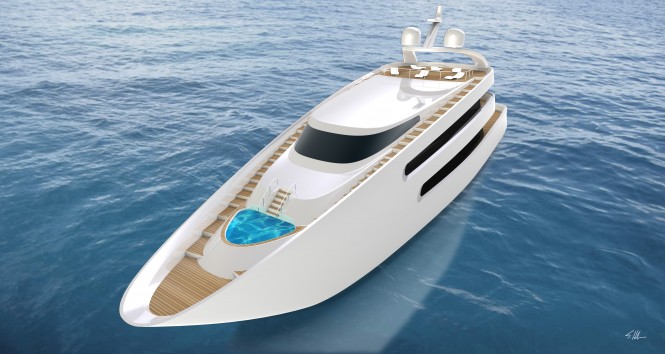 The top surface of PRIONA yacht is created by a continuous line that wraps the front tip of the bow and circles up and around the leading edge of the upper sundeck to the rear. Within this crisp, bold line, the top surface of the vessel exists as one flowing, continuous slope, traversable via a grand staircase that completely warps the entire perimeter. 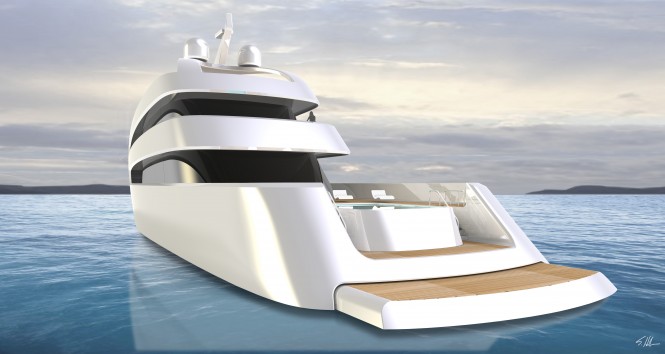 The use of the grand staircase evokes old-world elegance and nautical charm, which when juxtaposed against the ultra contemporary feel of PRIONA, a powerful ‘twist’ captures the imagination, grounding the design by evoking the human element. When just glancing at an object immediately reveals it’s intended human interaction, an emotional connection to the object is made, transcending utility.

Scott Henderson designs, manufacturers and distributes home accessory objects to over 450 retailers and museums throughout the world including The Museum of Modern Art, The Design Museum- London, The Guggenheim Bilbao, The Art Institute of Chicago, and many others.

Scott is known for his ability to transform the mundane.  He believes that if something makes you smile it becomes easier to use.  With over 50 patents in the U.S. and Europe for projects as diverse as housewares and home accessories to consumer medical products, electronics, aircraft and recently marine / watercraft, his work has been widely recognized in exhibitions, awards programs and in the press.

For Scott, design is not a discussion of form versus function; it’s about thinking and the quality of the big idea.  Scott’s work is included in the permanent collections of The Brooklyn Museum, the Chicago Athenaeum and Cooper Hewitt National Design Museum / Smithsonian Institution.

After years of success in the product design field, Scott is ready to expand into the world of Yacht and Water-craft design. He is currently busy working on some exciting luxury yacht designs, one of which is another 70m superyacht concept.