The New York Times – Simple Wood Toys, but So Much More

Another sleek and futuristic design created by Scott Henderson, following his previously published Priona yacht concept, is his latest 70m Superyacht QUILLON concept. Scott Henderson is a New York based designer, known for his original and innovative consumer products, including homeware, electronics, furniture and his line of Museum Store gifts under the MINT label. Many don’t know, however, that Scott has a background in designing large transportation vehicles, backing his interest in luxury yacht design. 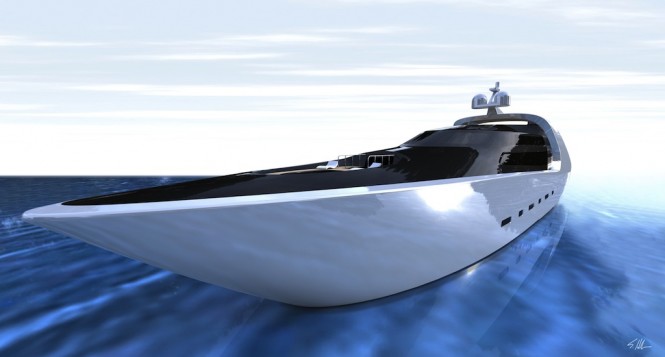 Luxury yacht design QUILLON was inspired by the protective guard of a sabre sword or scabbard (called a Quillon) that occurs just below the base of the blade, and just above the sword’s grip.  A super yacht must be able to slice through the rough open seas with speed and agility, while at the same time provide safe haven for the guests aboard.  QUILLON’s shape is sharp and formidable ahead of a protective reverse angled arced structure that rolls backward to surround a tranquil and protected set of three decks, a metaphor directly stemming from the sword. 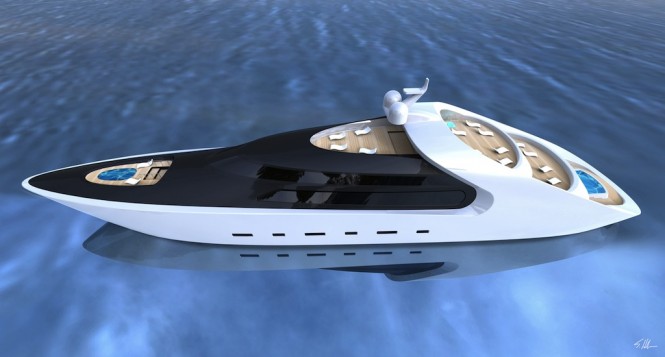 Scott Henderson’s QUILLON yacht concept addresses the two primary functional needs of a super yacht—the power and grace needed for the open ocean, while seamlessly and elegantly transitioning to a form solution that provides sanctuary and protection for the passengers aboard. 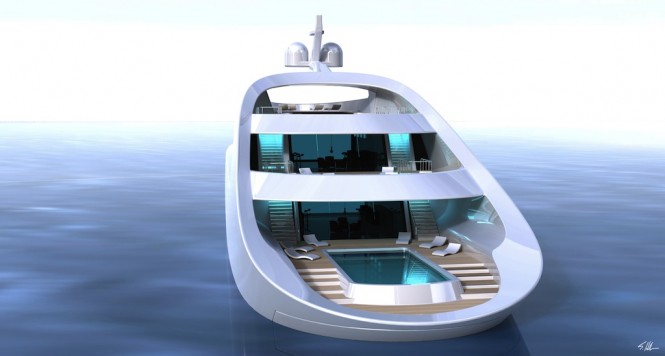 QUILLON’shull transitions to a reverse-angled spoiler that wraps and shields the rear outdoor decks and pool area,  a uni-body shape that is cut from the side view with a bold, chamfered single line, exposing and wrapping the super structure like a formidable armour-plate.  Unlike a traditional super yacht design, the hull of QUILLON wraps up and over the top of the vessel as one continuous surface. 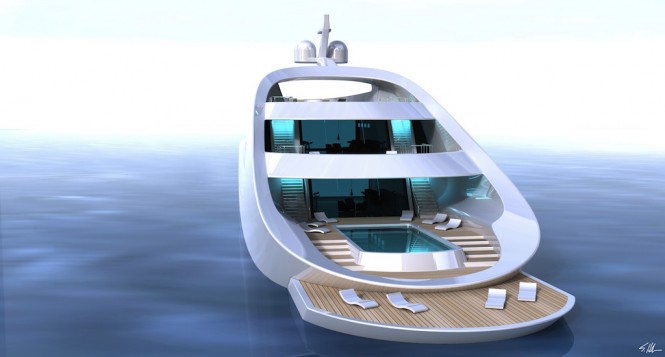 Mega yacht QUILLONfeatures a third level deck that passes through the uni-body reverse spoiler to a top-level sundeck that is not disrupted by the Communications / Navigation Tower.   At the pool-level, a massive retractable swim and sundeck doubles the size of the primary recreation area – an excellent feature when it comes to yacht charter.

QUILLON yacht concept also features two swimming pools,  a large one on the rear swim deck, and a small one in the forward bow, that is accessible via a staircase into the hull. QUILLON’s bridge connects on the same level to upper state rooms, with an expansive set of additional state rooms on the deck below it, as well as ample sleeping quarters on the lower deck. 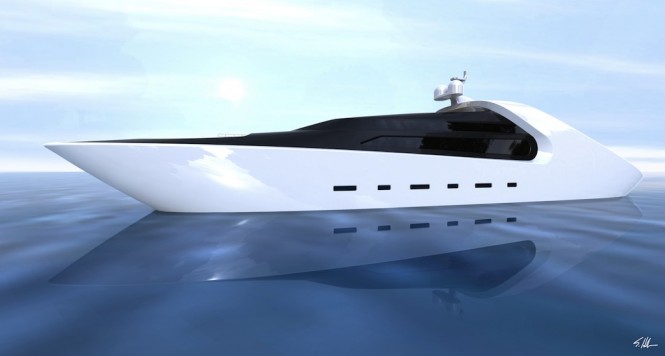 The infinity pool in the rear is flanked by cascading staircases on either side that lead to the large retractable swim deck, which has hinged compartments that allow two jet skis to be stored inside of it. 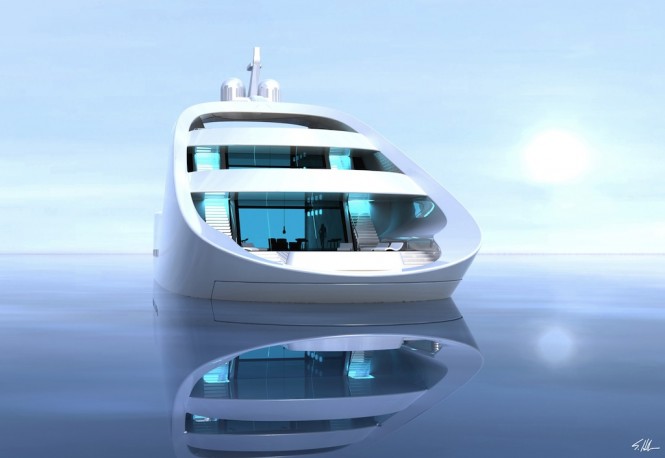 QUILLON’s “sword” becomes the perfect metaphor for the powerful yet gracefully iconic super-yacht, cutting through all that stands ahead of it – while protecting the person who wields it. Scott Henderson has designed a yacht that is not only suitable as a privately owned luxury vessel, but thanks to some interesting feature, she would also make a great charter yacht.