The New York-based designer, Scott Henderson, is renowned for his innovative consumer products in the areas of Houseware’s, Electronics, Furniture as well as his line of Museum Store gift under the MINT label. Scott has also a background developing large transportation vehicles, backing his interest in mega yacht design. The newest and dramatically looking 70m motor yacht MANTA concept is his third luxury vessel published on CharterWorld, following the 70m superyacht Priona concept as well as the 70m Quillon yacht design.

The impressive luxury yacht MANTA derives her inspiration from the Manta-Ray, with its swept delta wings changing inflection from negative to positive as they propel the beautiful animal through its ocean terrain.

MANTA yacht concept’s first deck is visually peeled back from the lower hull. This ribbon-like form then twists and traverses the vessel’s vertical height, wrapping over and past the main deck and reconnecting with the upper sun deck to form its protective rear barrier.

The unique bridge to the upper sun deck allows a stairway to occur on the inside of this twisting plane, providing a dramatic passage and physical connection between the middle and top tier of the superyacht MANTA, as well as providing an impressive side view for the vessel as a whole.

The unusual staircase captures the imagination by allowing access to the upper sun deck from the exterior of the MANTA yacht concept, rather than just from the interior or rear staircases. The metaphor to the Manta Ray’s wingspan in effect makes the upper sun deck larger in square area than the middle deck – an unusual scenario that further differentiates MANTA as a ground-breaking super yacht. 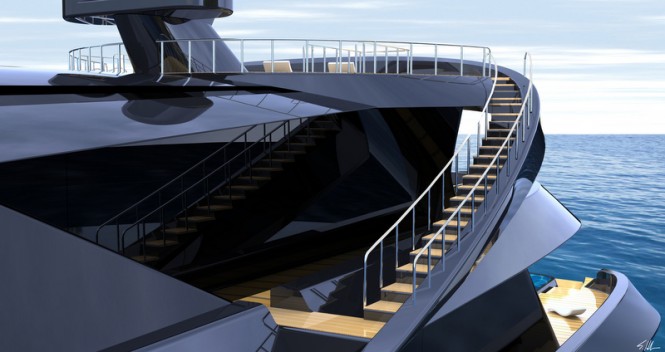 When one thinks of a Super Yacht’s traditional archetype, the primary elements that come to mind are the hull and superstructure and how the decks interact within that composition. MANTA yacht’s three decks slice through the upper super-structure and continue straight through the ship’s forward bow using uninterrupted, dramatic diagonal lines – each line eventually visually intersecting in the open space ahead of the ship. This powerful and graphic use of converging lines give the MANTA’s side-view a unique and stunning look, suggesting speed, power and performance- while also adding to the aqua-pomorphic Manta Ray metaphor by abstractly communicating the powerful gills of the graceful sea animal.

A large swimming area and main sun deck occur at the 70m luxury yacht MANTA’s rear, with large entrances to the main cabin and state rooms possible through glass panels that panagraph (lift out and slide over) into their open positions. 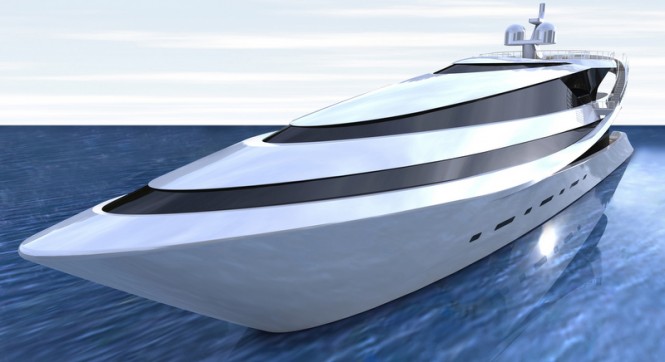 Dramatic angles in the rear of the vessel juxtapose themselves against the long and sweeping angles of the converging lines that intersect the upper structure. The side view of megayacht MANTA visually connects the steep angled profiles of the rear cabin, with the angles of the back surfaces of the three decks and the angles of the communications and navigation tower — all of which are intersected by the stunning and unexpected twisting plane that peels away from the main outer surface of the lower hull. What are usually three horizontal breaks in the Super-Yacht’s upper structure are now intersected by an organic ‘ribbon’ stemming from the lower hull, making MANTA instantly memorable and iconic.